Join the pack & get all the latest!

Should my dog eat gluten-free?  Intolerance to gluten is actually very rare in both humans and dogs.  Like, less than 1% rare.  That 1% reported are Irish Setters in the UK.  That’s pretty specific.  In humans, this disease is called celiac disease, and for dogs, it’s called gluten-sensitive enteropathy.  The gluten protein damages the villi in the small intestine, which makes it useless in absorbing any nutrients.  Effects of this disease come with unpleasant diarrhea, vomiting, bloating, and oh so much more.

“If it’s so rare for dogs, why do I see gluten-free dog food and treats everywhere?”

Of course, you see it everywhere!  Just like for human-foods, there are constant health trends, such as low-fat, low-carb, fat-free, sugar-free, soy-free, dairy-free, the list goes on.  I sometimes see all these labels at once on one product and wonder, “what’s there even left to eat?”

Most often dog owners will reflect their eating habits onto their pets, whether they’re vegetarians, vegans, or a junk food lover.  Except, of course, chocoholics.  Would death by chocolate be considered animal cruelty?  Kidding!  Companies have caught on to this trend and are not targeting your dog, but YOU;  the person who decides what your dog will eat.  So if you’re trying the gluten-free diet because it’s supposed to be a lot healthier for you, why not for your dog too?  It can’t hurt, right?

Before you make that decision, let’s get to know more about this gluten. Shall we?

“Gluten isn’t such a bad guy”

Actually, it’s a great source of protein, commonly found in grains like wheat, rye, and barley.  It’s neither inherently good nor bad for us.  It’s what makes dough “sticky” and gives us delicious bread, pastries and pasta.  It’s eeeverywhere!  I was surprised to find out that it’s even in beer and soy sauce.  I’ll bet you’ll find it in your favorite food.

Gluten is not found in all grains and all grains do not have gluten.  They’re not the same despite popular beliefs.  Just remember that when you’re checking out the labels.  Gluten-free does not equal grain-free.

“So why is gluten still considered a bad thing?”

Well, did you notice that most of the foods I just listed are yummy carb foods?  Whether the carbs are made of gluten or gluten-free grains, to some dog-owners they have all deemed an unnatural source of nutrition for dogs.  The arguments make sense as grains are not normally consumed in the wild.

However, our four-legged friends are very different from their ancestral wolves today; inside and out.  Modern dogs have evolved and so have their dietary abilities and needs.  If my sister’s dog can eat a sock, a spaghetti noodle won’t kill him.

Another reason gluten is believed to be bad is that dogs have developed allergy-type symptoms, such as itchy skin, ear infections, weight loss, and general digestive catastrophe, due to over-eating on the refined wheat products.  Some vets believe its too much fat or fiber, not particularly a certain food.  Recent studies show that actually, beef and dairy are the biggest culprits for triggering these allergic reactions.  Neither of which contain gluten.  Ah-ha!

“Despite who’s to blame, a gluten-free diet can do wonders for their health!”

Up to this point, I’ve been cheering for gluten, saying it’s been an innocent bystander who just happened to be at the right place but at the wrong time.  Except for those with celiac disease, then it’s in the wrong place all the time.

You can’t deny the positive results people and dogs alike have gained through a gluten-free diet.  “My energy has skyrocketed!” “Keeping the pounds off!” “My dog’s coat is soft and shiny again!”  “Thank god he’s stopped sh*tting everywhere!”

A few of my very good friends are gluten-free and they look AH-mazing!  Is it a coincidence?  There’s not enough supporting research that shows taking out gluten specifically is beneficial.  Maybe it’s something else besides eliminating gluten.  It could be eating less grain in general or eating less highly processed foods.  Eating more fresh fruits and veggies— who really knows?

My point is this. I don’t think you can credit success or failure on one thing; it’s a combination of factors and striking the right balance.  For example, if I were to fill up on Cheetos and Sour Patch Kids every day, I’d still be following a gluten-free diet.  Yup, that’s right– they don’t contain gluten!  However, I’d be on the fast track towards diabetes and losing my teeth.  Do your research, ask your trusted vet, and do it right.

“Here’s what to watch out for.”

It’s completely harmless for your dog to be on a proper gluten-free diet. There is no nutrient in gluten that your pup can’t get in other foods.   However, take note of the difference between gluten-free natural versus gluten-free processed.

Companies may up the sugar content or increase the use of refined grains to make up for lacking ingredients.  Look for quinoa or brown rice, both are nutritious grains and free of gluten.  Ingredients like corn, cornstarch and tapioca are technically gluten-free but offer little to no nutritional value and commonly used as fillers.

Other products may double up on the meat protein.  First, check and see if they are using meat by-products or wholesome cuts.  Protein should be at about 30% on a doggy diet.  Consistently feeding high protein may lead to obesity.  Remember, its the same for humans.  Too much of one thing isn’t a good thing.

“Your dog doesn’t care what Instagram says, why should you.”

I believe that marketing and media have been a huge driving force behind gluten-free and other diet trends.  It influences our buying habits, which also impacts what we buy for our dogs.  Don’t pay extra just because it’s trending on your news feed.  Sniff out more information in the ingredients and nutrition facts and make sure it all balances out.

“Two of the oldest dogs who had ever lived had completely different diets.”

Bluey and Bramble, both title holders in the book of Guinness World Records.  Bramble lived to be 27 in dog years and followed the same vegan diet as his owner.  Bluey was a total meat eater and being from Australia, loved his kangaroo and emu meat.  He lived to be 30 years old.  As you can see, every dog is different, as are their nutritional needs.

If your dog is showing some concerning symptoms, your vet will help by properly diagnosing through blood tests or an elimination diet (especially for gluten) to pinpoint what exactly is affecting him.  Do not self-diagnose, we all know what happens when we search our symptoms on Google— panic ensues.

Be an informed shopper.  We are their caretakers and frankly, our dogs don’t get a say in the matters of their diets.  Although I’m sure if we let our dogs choose, they’d prefer to eat the bad stuff anyway.  Don’t we all!  You may be depriving them of their favorite pupcake, woofle, or pupsicle when you don’t even need to.  And that’s the real tragedy.

Is or was your dog on a gluten-free diet?  Let me know how it’s made a difference in your dog’s health in the comments below.

Click HERE for one of my delicious gluten-free dog treat recipes! 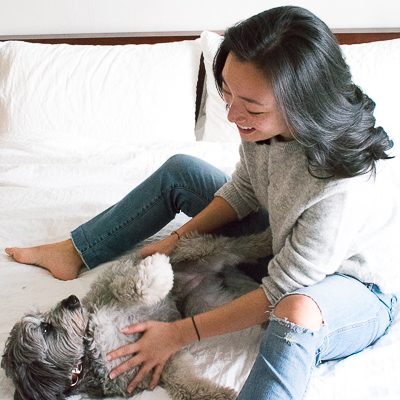 Sit Stay Love was born out of wanting to spoil my dog, Luna, with as many treats possible! Like every Dog Mom and Dog Dad, I wanted to make sure I was giving my dog the best quality ingredients.  Simple natural goodness with no added

stay up to date

How to flirt in dog speak? 🐶 💗 Valentines Da

Do you feel like you’re the only one being cauti

Been getting lots of requests for these custom dog

Did you know January 13th is Korean American day?

Sit Stay Love was born out of wanting to spoil my dog, Luna, with as many treats possible! Like every Dog Mom and Dog Dad, I wanted to make sure I was giving my dog the

What does your dog’s tag say about them? Luna i

What’s small and round and spreads joy all aroun

Be honest~ are you a fan of the Korean Chuseok ric

Do you ever feel like you’re a bit different fro

Happy National Dog Day!! Sometimes I look at my do

What was the best part about your summer? I want t

Summer is over and time to get back to work! But s

This error message is only visible to WordPress admins

There has been a problem with your Instagram Feed.
0